In 2017, ASU’s Food Services made a contract with the Sustainable Development department to purchase food produced by the Appalachian State’s Blackburn Vannoy Teaching and Research Farm in Ashe County. In the 2019 calendar year, over 4,500 pounds of the farm’s produce was served at Appalachian State’s dining halls, cafes, and catering events.

Appalachian Food Services is purchasing produce from Appalachian State’s farm to use in the University’s dining halls (source: AppalachianToday).

To expand on the its production capabilities, the farm is excited to announce the addition of an advanced Ceres greenhouse, which will be located next to its Atlas high tunnel. The Ceres greenhouse is well insulated and regulates temperature with a Ground to Air Heat Transfer (GAHTTM) system commonly referred to as a “climate battery”. The GAHT consists of a network of perforated heat-exchanger pipes buried below the footprint of the greenhouse. The earth serves as a thermal buffer to cool and heat the greenhouse during the day and night with assistance from high-volume circulation fans (similar to a home’s central HVAC system). Because of its unique design, the greenhouse can sustain a year-round growing climate for plants, even during notorious High Country winters. The GAHT serves as an alternative to traditional greenhouse heating systems which are heavily dependent on fossil fuels like propane. 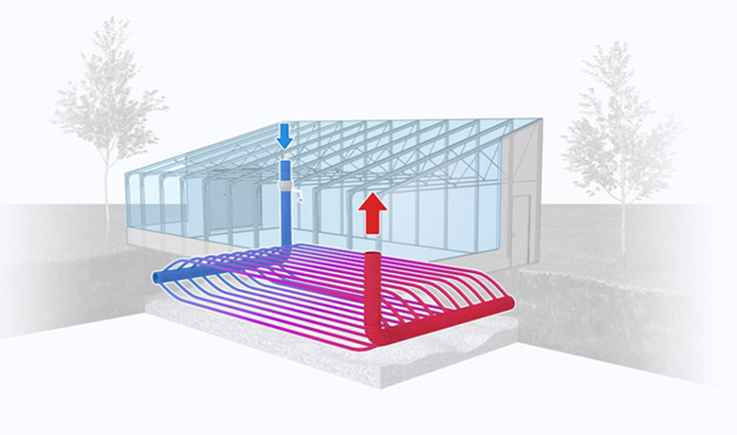 This is a schematic of the Ground to Air Heat Transfer system (Ceres Greenhouse Solutions). Air is circulated through the earth to cool the greenhouse in the day and heat it at night (source: Ceres).

The Sustainable Technology and Built Environment (STBE) department has taken a lead role in this greenhouse research project by raising funds, awareness, and through developing a partnership with Ceres Greenhouse Solutions, connected by STBE and Nexus Project Alumnus, Christian Houpe who works in Engineering and Product Development at Ceres. This advanced greenhouse project builds on the mission of the Nexus team to enhance farm productivity with sustainable technology.

Faculty and students are using this unique opportunity to conduct a comparative study between the advanced Ceres greenhouse and the simple high tunnel greenhouse because they are located side-by-side and have nearly the same square footage. We want to characterize the performance of the GAHT system within the insulated greenhouse environment. In order to conduct this study, we will measure environmental data including: solar irradiance, Photosynthetically Active Radiation (a measure of light used for plant growth), temperature, relative humidity, wind speed, and carbon dioxide outside and inside both greenhouses. We also plan to install temperature and relative humidity sensors inside the GAHT and the surrounding soil to determine the rates of heat exchange. All of this data will be used to quantify metrics like Daily Light Integral, transmissivity of the glazing, and envelope heat loss. Our goal is to quantify the GAHT’s ability to provide a stable growing environment despite fluctuations in outdoor conditions. 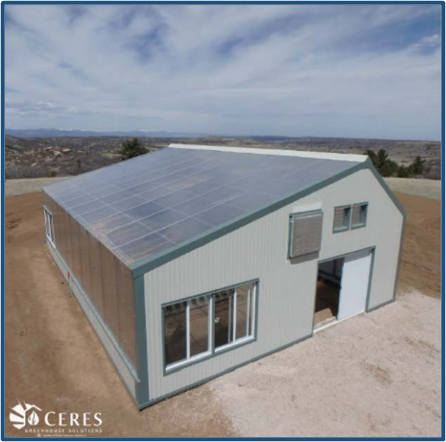 An example of a Ceres greenhouse like the one to be built on Appalachian State’s Teaching and Research farm (source: Ceres).

This project has potential for community outreach and engagement, as the climate battery concept can be transferred to more simplistic, cost-effective systems. This system will enable farmers to extend their growing season into the winter. By maintaining temperatures above freezing at night, farmers will be able to grow more seasonally diverse produce and broaden their niches in local markets. More specifically, they will have the appropriate growing environment to start seeds early in the spring season and be able to yield more robust produce.

We are excited to announce that the foundation for the Ceres greenhouse has been built and all the construction materials are on site. The App State team has successfully constructed the GAHT system and prepared the underground network for sensor placement. Stay tuned for more updates on the progress of the Ceres Greenhouse construction and research study. 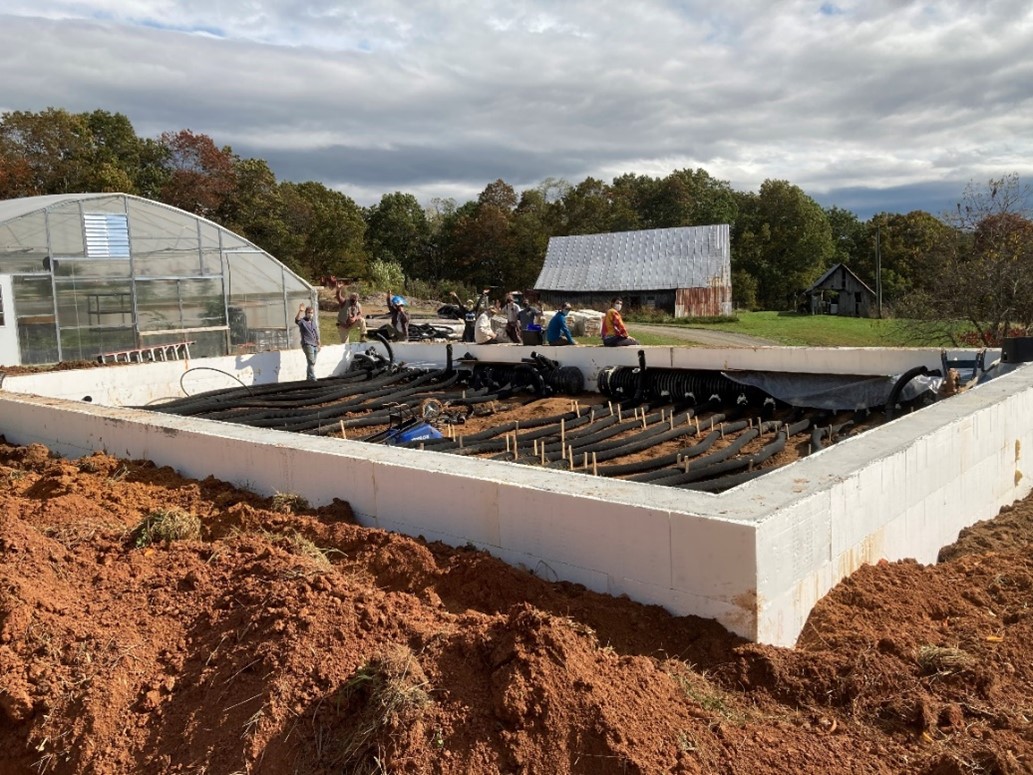 After a hard day’s work, the App State team shows off the first layers of the GAHT system laid into the Ceres greenhouse’s foundation. The Atlas high tunnel greenhouse can be seen in the background (source: Jeremy Ferrell). 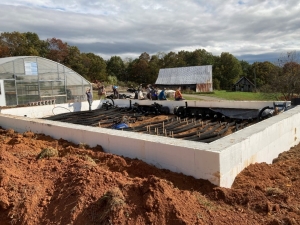 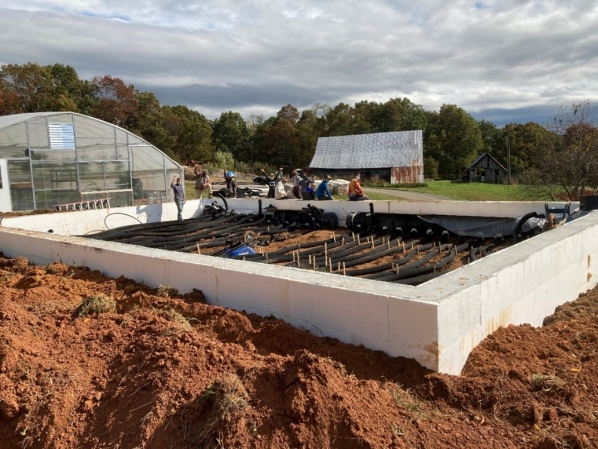